by Anthony Reid
The following is a brief photo journal of my experiences during the hike. My aim is to share my views, memories, and thoughts in the same manner they unfolded on that day. 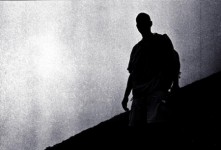 Since the start of our workcamp my volunteer group and I agreed that Ometepe was a must see during our stay in Nicaragua. After reading the Lonely Planet travel guide on Nicaragua I saw Ometepe as the opportunity to finally partake on that hike I’ve been craving since my last spring break trip to the Harriman Mountains in New York with 40 of my middle school students. So, on the evening of my group’s arrival to one of the island’s youth hostels I hatched out an itinerary for a hike up La Concepcion the following morning. The plan was to set off at 7:00am, follow a hiking trail to a scenic spot called El Floral located about halfway up the volcano above the treeline, and return to meet the others by 1:00pm. And because I was the only member of my group interested in going, this would to be my first ever solo hike. 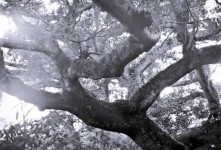 In order to reach the start of the trail leading up La Concepcion I had to take a bus from Moyogalpa up a very rough dirt road to a stop in the middle of nowhere. I should mention that the guidebook advised travelers to only go on island hikes with an experienced guide. Within the first hour of the hike I realized why this was the case; a number of the trails were extremely steep, overgrown with vegetation, and none of them were marked. Much of my success depended on my moderate sense of direction and on just pure luck. For instance, I’m lucky the bus driver took the trouble to point to the trail entrance and yell out, “Volcan!” Beyond that point my strategy was to make sure that I was always kept going in an upwards direction and when coming onto a fork in the trail to keep right so that I could always find my way back.

After walking along a farmer’s dirt road for about an hour I finally reached a dead end. To the side there laid a trail that eventually led me to the Guardian Tree. This was a gigantic tree that I imagine was placed there to either serve as a natural resting place for weary hikers or a mythical guard for the volcano against a naïve American invader who have no idea what he is getting himself into. 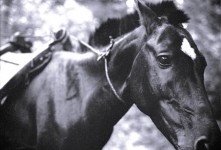 “How in the hell did someone get a horse up here?!” This is what I was thinking after having climbed up the steepest trails I’ve ever seen and coming across a horse tied to a tree in the middle of a small clearing. There it was, completely abandoned and surprised to see this stranger coming at it with a camera on a tripod. This was the first spot where I could see that I was getting very high up. I could look down into the trees and truly see the depth of the forest. In the distance I could hear the sound of a machete chopping at banana trees and thought, “that must be the owner of the horse.” Here I took my nest break since leaving the Guardian Tree and realized that the hike was longer than I anticipated and I had not brought along enough food or water… Live and learn… 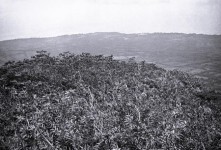 At this point I was absolutely exhausted. My thighs were shaking and ready to give way and my calves were burning. I was terrified of pulling a muscle, as I had done only a month before the trip during a jog through my neighborhood. I ironically thought how fortunate it was that I do jog regularly because otherwise I could not have made it this far in the pace that I was going. I had not anticipated the amount of time I would need to reach El Floral. Since the start of the hike I found myself scrambling through the forest trying to make good time. Again, the plan was for me to meet the rest of my group at 1:00pm. And up until this point I have encountered nothing but forest and trees—no scenic views of the volcano or the island horizon beneath it. So many times as I struggled along the trail I hoped that around the next bend, or over the next hill I would reach El Floral, which I thought I wouldn’t know even when I saw it. Reaching this point came with tremendous relief. For the first time I could see the horizon as it emerged over the forest treeline. At last, I thought, I am finally getting close. 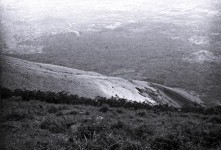 The final twenty minutes before reaching El Floral the forest had completely gave way to a more empty terrain littered with impressive lava carved rocks and shrubbery. I remember it was like coming up from the darkness of the ocean floor and seeing the sky, feeling the wind, and embracing the vastness of being on top of the world. By now my legs were so fatigued that I just fell to the ground and gazed at the sky while lying flat on my back. I found great pleasure in relinquishing a great deal of fear that had followed me that day: The fear of being alone in a strange country, in a strange forest, with no one to depend on but myself. The fear of creatures that lives, hunts, and creeps in the woods—bugs, spiders, snakes, wild boars, and machete wielding bandits. And most of all, the fear of not making it—that it had all been for nothing. The thought of turning back came and went many times during the climb—almost with every step. 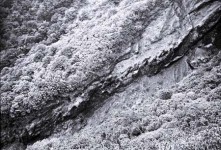 Once at El Floral the single most important thought running through my mind was, “My God, this was so worth it!” 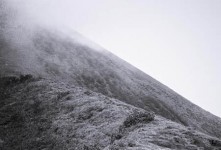 As luck would have it, the moment I began photographing the volcano an even thicker cloud descended over me carried by a ferocious wind. Looking towards the top of La Concepcion I saw the beautiful rich green of grass become smothered by white menacing clouds. These clouds also carried the scent of volcanic gasses, which made climbing to the very top of this active volcano so dangerous.
This picture shows the very place where I stood and made a promise to myself. Someday I would continue this journey and follow this very path to the apex of the volcano. Realizing that I have come so far, worked so hard, and still have not reached the top evoked both sadness and a hunger for more climbing. And I will someday soon, when I have more time, more food and water, and, of course, a guide. 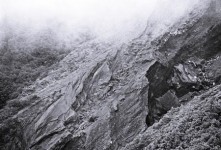 12:50pm—Returning to the Forest and Downward

12:50pm—Returning to the Forest and Downward
According to my original plans I should have been already back in town and touring with the rest of my group. I knew this would not happen once I reached El Floral. My only concern now was making it back in time to catch the last ferry off the island. So leaving that heavenly place had to be quick and painful. I was able, however, to take a few parting photos.

1:00pm—La Concepcion from the Treeline

Going down was much more difficult and dangerous than going up—especially when you are in fear of missing a bus returning you to civilization that only comes once an hour if at all. The interesting part about coming back down was the revisit of all the sounds sensations felt while coming up. At certain points the distinct sounds of certain insects were prevalent than others. The scent of trees, flowers, and fallen fruit would remind me of hours earlier when I wasn’t as tired and thirsty. 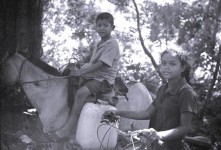 Was stopping to take this picture worth the risk of missing my bus? I’ll let the reader decide. What I life this these kids must live—out in the middle of nowhere with so much nature around them. What an ideal pair to see after not seeing any other humans since hours earlier. I asked them could I take the picture and they both politely agreed. After taking this picture the girl gestured to the boy who then asked me for dos cordobas. I then asked, “¿Que haces con dos cordobas?” The boy replied, “Compra helado.” I gave them both cinco cordobas and was again on my way. 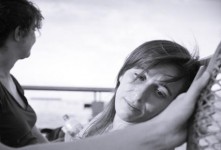 This was my group and I moments before taking the ferry off the island and back to the mainland. I often wonder how that day would have been different if some or all of my fellow volunteers would have accompanied me on the hike. More and more I believe that faith meant for me to be alone in those woods. I was meant to truly to connect with nature, my thoughts, my fears, and the beauty of Nicaragua without distraction.
The best and rarest moments during a workcamp is when the participants have the time to relax and sit content in one another’s company while reflecting on moments they’ve spent together. Together we all realized that what we experienced was special and could never be repeated. We could never be all together again at that particular time in our lives and in that particular place… 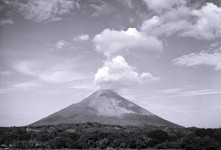 Like everything else that lives, experiences are themselves unique from all other experiences. Still, it was a beautiful day.