Organic in essence, simple in form, yet artificial in way of its conception–a stone quarry is truly a magical place. When situated in the middle of a green forest a quarry is nothing less than enchanting. The Fürstensteinbruch or Prince Quarry is one of several forbidden…[showhide type=”pressrelease”]

stone quarries in a patch of forest lying just north of Königshain in the eastern part of Germany. These idyllic scenes depict the power of the surroundings on my fellow international volunteers as we take leisure after a long day of work. Upon first entering the open space from beneath the dark canopy of the forest I stood overwhelmed by the quarry’s size and natural beauty. Suddenly, after a quiet walk through the woods and without warning, I found myself faced with all that water surrounded by menacing walls of magnificent stone. The massive crater walls topped with pine and evergreen provide the quarry provide warmth for local bathers who  no longer regard it as merely a man-made intrusion dominated by cold, deep, dark waters, practically devoid of aquatic life.

We drove through the winding East German countryside in two cars while being led by a our guide who rode a vintage DDR era scooter (most likely a Simson). Locals are unusually happy to adopt members of the visiting international workcamps to take on afternoon and weekend excursions to hidden places where one would rarely find outsiders. On this outing went the members of our entire group: 2 Russians, 1 Italian, 3 Spanish, 1 French, and myself, the American. The rest of us were both local Saxons and others from different parts of Germany. With towels in hand and sandals under foot we set out with our guide on this small adventure through single-street villages with German Saxon names like Girbigsdorf, Schöpstal, and Königshain. The journey, though extensive, proved a pleasurable ride blessed by the ease of clear roads, soft windy weather, gilded by the warm afternoon sun falling on fields of wheat, barley, yeast, and other ingredients of the many local breweries.

On the northwestern side of Königshain stands the entrance to the forest where one would find the quarries Thaddenbruch, Hamannbruch, and Fürstensteinbruch. A small dirt road led us on foot to the Fürstensteinbruch, the only one of the three ponds we had the opportunity to visit. These photographs depict how I remembered the experience. They reflect how–after living together for only a week–we enjoyed the company of one another during perfect moments that only summer could bring. 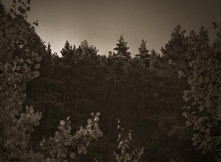 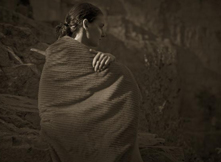 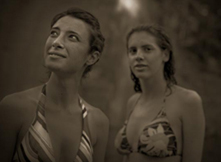 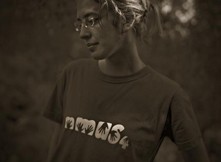 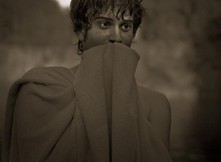 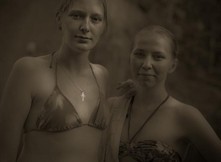 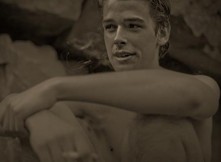 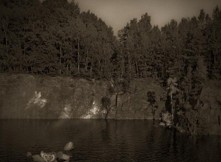 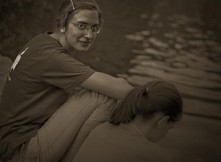 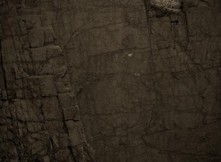 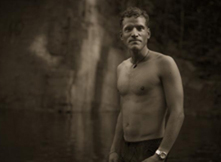 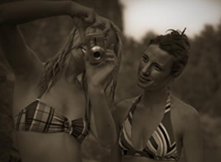